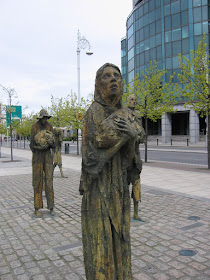 The book I've chosen to read on the plane tomorrow is Star of the Sea. It's about a boat carrying Irish refugees who are fleeing to America from the Irish Potato Famine in 1847.
I keep thinking that the plight of the Irish in the potato famine is like the plight of the Pakistanis in the recent floods, because of the paltry help offered by people outside the disaster.

The media spotlight has moved away from Pakistan, but the suffering goes on and on. There has not been the overwhelming and generous response from the rest of the world as there was for the victims of the Haiti earthquake, or the Indian Ocean tsunami. It’s been suggested that this is because of the suspected links between the Pakistanis and Al Q’aeda and the Taliban. A friend told me that someone said to her – “I’m not sending money to Pakistan – they’re all a bunch of terrorists.”
“14 million of them?” said my friend.
“Absolutely.”
“Even if you really believe that” (utter rubbish) “what about the children?”
“Their children are their responsibility,” said the heartless one.
Inside the cover of Star of the Sea is a quote from Charles Trevelyan, assistant secretary to HM Treasury in 1847, who was knighted the following year for overseeing famine relief. He said:
“[The Famine] is a punishment from God for an idle, ungrateful and rebellious country; an indolent and un-self-reliant people. The Irish are suffering from an affliction of God’s providence.”
Sue Hepworth at 7:27 am
Share