You may not believe this but it can take an hour to write a blog post which is why I'm being mean with them at the moment: I don't have any writing time to spare.

So here are some oddments that have not been crafted into a post and do not contain my usual fact checks and hyperlinks:

I just read Julia Samuel's new book called Grief Works, which I think is helpful. She has general information and suggestions, and she also has sections on losing a partner, losing a parent, losing a sibling and losing a child. She does not, however, have a section on losing a friend, and this is a shame.

I was looking for a novel that Gil (almost 11) would like to read. He likes exciting fiction but he doesn't like fantasy (rule out Harry Potter)  he likes stories about families, and he doesn't like stories that are too dark. (His tastes are fairly similar to mine.) I asked around and got some good suggestions and as a result bought him a book called Once by Morris Gleitzman. It arrived on Saturday and I decided to read the first chapter just to check it out. A few hours later I'd finished it. I hadn't been able to stop reading. I can't wait to see what he thinks of it.

When I was a beginner writer I read a lot of writing books that talked about 'finding your voice as a writer' and I wondered what on earth it meant. As I went on, I understood. Also, I found my voice. I'm trying not to read any fiction at the mo (except children's books) but I did read a piece in the New York Times by Garrison Keillor, and then dipped into a book I am saving by Sebastian Barry and it hit me in the face as I moved from Keillor to Barry ( two of my favourite writers) how different their voices are. I'm thinking they should show excerpts to budding writers to explain the concept of voice.

Last week Dave and I went with his sister and husband for a fabulous walk that involved two steep climbs. The second was up High Tor from which there is a sheer drop of several hundred feet (you'll have to find the stats on the net) to the river valley below. We were looking down on the cable cars that Kit and Sally ride on at the end of Plotting for Grown-ups, and I asked my sister-in-law to take a picture of me with them in the background. If you look carefully you can see three tiny pale dots in the centre of this photo: 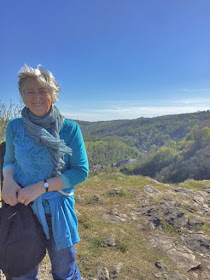 Here is her photo-shopped version: 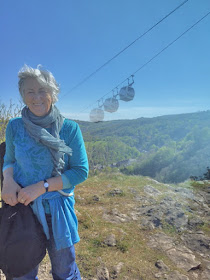 Lastly, I am trying to ration myself and blanking out complete days in my diary cos it's been a bit too frantic lately. Realising how I badly needed some peace and quiet yesterday, I was reminded of a sentence from an Amazon review of But I Told You Last Year That I Loved You and thought how the same could be said of me:

"Fran is an extrovert who is drawn to people, but she becomes both distracted and exhausted by their needs."

That is one very perceptive reviewer.