How long does it take to write a paragraph?

'I spent all morning putting in a comma and all afternoon taking it out.'

This may or may not have been said by Oscar Wilde, but whoever said it, it illustrates something that non-writers may not be aware of, namely how much trouble some writers go to to get it right.

I've been working and reworking a particular scene in my new novel, trying to get it right. And my writer friend Chrissie has been telling me
a/ to tone it down
b/ that in certain places, I am telling, not showing
c/ that the dialogue is still too much on the nose (i.e. my characters' dialogue is too straightforward and I should be using more subtext.)

This morning I'd rewritten the second half of the scene and had got to the last paragraph:

She took another gulp of wine. She was drowning in the past. Then she thought of Alex. She opened the kitchen drawer and took out the card he’d sent her and looked at it for a moment. She got up, and with shaking hands she stood it on the dresser with the family photographs, as if to restore her sanity and stability.

and I wasn't happy with it. I wanted the last sentence to end with a strong noun with just one syllable. How my prose sounds in my head is important; and the strength of one short beat at the end of that sentence would enhance the meaning.

I couldn't think of a word that would do, so I tried the Word thesaurus. No joy. I tweeted a request for one syllable words that meant 'stability' or 'sanity' and  helpful people tweeted back words that were not nouns, and ones that had more than one syllable, and then a few which fitted the request, but which still did not say what I wanted: wit, sense, ease, right. (I've just realised why I got words of two syllables! People were not taking me literally!)

I was writing in bed, and I shouted a request to Dave who was scroll-sawing wooden snowflakes in the room he calls his study and I call his indoor shed. He called back 'peace, calm, hold.'

Later, on the phone, I asked the family member who declines to be named. I told him the words I'd been offered and he asked for the context. I told him the sentence and he suggested 'strength.' He said it was easier to think of something when you had the context.

I am grateful for all the suggestions, and have considered them carefully. None seems right to me, and bearing in mind what Chrissie said about showing not telling, I've decided to do without...


She took another gulp of wine. She was drowning in the past. Then she thought of Alex. She opened the kitchen drawer and took out the card he’d sent her and looked at it for a moment. She got up, and with shaking hands she stood it on the dresser next to the family photographs.

I think that's the best option. I am trusting the reader to understand why she is putting the card up there on the shelf. It may not be clear to you, dear reader, but I don't want to give you the whole scene as it's pivotal.

And now, here is something from this morning's Guardian Review that amused me: 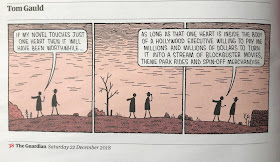 I should not put it here because of copyright but I'm going to be wicked for the weekend, and delete it next week.