75 years ago today, at quarter past eight in the morning, a US plane dropped an atomic bomb on Hiroshima city centre, a busy residential and business district, crowded with people going about their daily business. The fireball created by that single bomb destroyed 13 square kilometres of the city.

The heart of the explosion reached a temperature of several million degrees centigrade, resulting in a heat flash over a wide area, vaporising all human tissue. Within a radius of half a mile of the centre of the blast, every person was killed. All that was left of people caught out in the open were their shadows burnt into stone. Beyond this central area, people were killed by the heat and blast waves, either out in the open or inside buildings collapsing and bursting into flame.

Many of those who survived the immediate blast died shortly afterwards from fatal burns. Others with possibly less fatal injuries died because of the breakdown of rescue and medical services, much of which had been destroyed, with personnel themselves killed. Within two or three days, radiation victims who were near the hypocentre developed symptoms such as nausea, vomiting, bloody diarrhoea and hair loss. Most died within a week.

Radiation victims further away from the explosion developed symptoms one to four weeks after the explosion. Many survivors – known in Japanese as hibakusha – still suffer to this day from the impact of radiation. Pregnant women who survived the bomb faced additional horrors, for many babies were stillborn, and those born alive were often deformed, and faced higher infant mortality rates than normal.

On 9 August, the US dropped an atom bomb on Nagasaki. This bomb was more powerful than that dropped at Hiroshima and had the same tragic consequences.

What is morally wrong cannot be politically right.
Nuclear weapons are obscene and should be banned.
What's more, they serve no legitimate purpose. The UK's own National Security Strategy identifies the real threats we face today as terrorism, cyber-attacks and climate change. Nuclear weapons would be useless in dealing with these. The money spent on them could be better spent on health, education and housing.
This year, because of the pandemic, Bakewell Quakers will not be holding their annual Hiroshima Peace Vigil. This is us on two previous years: 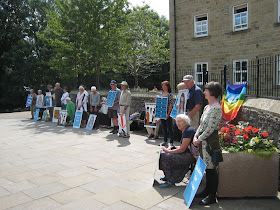