The trouble with soundbites

'You did well,' Dave said, 'but you sounded rather tense.'

We were talking about my 'appearance' on Woman's Hour yesterday.

I probably was a bit tense, and it's not surprising. I am used to being on local radio, either via the phone, or in person, and it doesn't faze me. Being on a live call on national radio is different.

They email and text you a link and you try to establish a connection with the studio via one of those. I tried both unsuccessfully. Then when I was successful I heard a repeating message: 'You're now connected to the BBC. Please stand by and someone will be with you shortly.' This is played on a loop, and meanwhile you have to talk over it so that the engineer can check they can hear you.  It took half an hour, spread over longer, to make it work. Then you have to sit listening to the programme on air for twenty minutes until it's the time for the feature you're in. So yes, I was tense.

Then you are asked two questions interleaved between other people's questions, and you have to find a sensible answer pronto. The whole session lasted just 8 minutes for 3 of us and Jenni Murray.

I listened to it last night in bed on catch-up. First I thought - Wow, that 95 year old woman was amazing! Then I thought - Why on earth did I mention the jewellery box? I could have said the hat I bought to get married in, 50 years ago:

or Dave's favourite spoon for eating his yoghurt, or his guitar or his teddy: 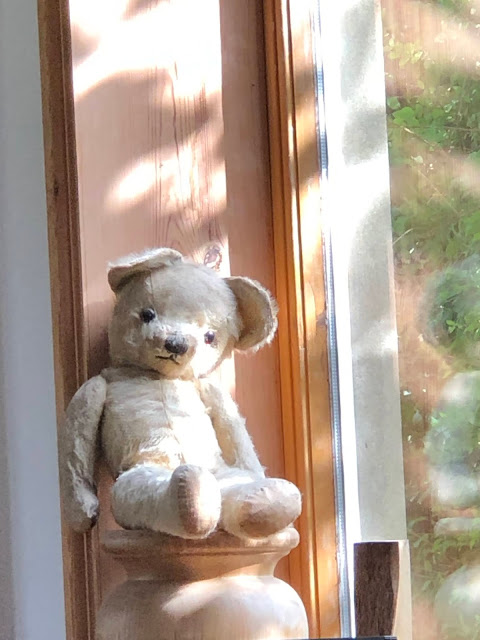 And then, of course, there were all the belongings of the family-member-who-declines-to-be-named, who refused to put them in storage.

The fire happened 24 years ago and I had re-read the Times article I wrote about it to refresh my memory, and still I didn't really say what was important.

I also said something that wasn't true. I said it was the grandfather clock we bought for Dave's father that was rescued from the ashes. It wasn't. It was the one Dave inherited from Auntie Edith. I got mixed up.

The upshot  of all this is that from now on I shall be forgiving of people who say things in interviews they later regret. It is very hard to give a considered response to a question when you are on edge, and you know that time is short.