The berries on our hawthorn tree are turning red, the sweet pea stalks are now too short for picking, the autumn sunsets have begun 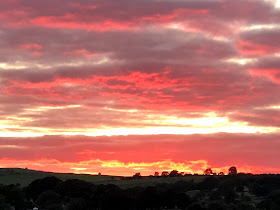 The caterpillars have eaten my nasturtiums: 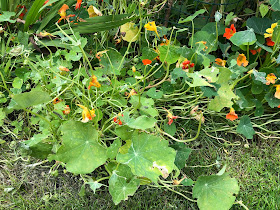 so I'll have to give up drawing them;

the fabulous grandsons are going back to school so seeing them will feel perilous, when it never did before;

and Dave says his work shirt has lost it's (his word) "cachet." 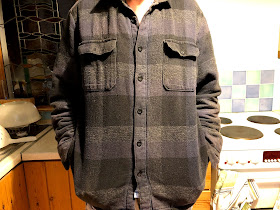 I told him it never had cachet, but...his ideas about clothes do not align with mine.

Have you bought my new book DAYS ARE WHERE WE LIVE yet?

Here's a taster which appears in the book  - a piece I had in the Times some years ago about Dave's clothes, when he could still have been described as middle aged:

Marks and Spencer’s U turn: succour for the middle aged male
This may be the era of the grey pound when trendy fifty-somethings refuse to grow old, and avidly scan the fashion pages for what is hip. But there is a sartorially disreputable underbelly of middle aged men who are unmoved  by new styles, and who wish it was still the 1950’s when custard was custard, and middle aged men were middle aged men, in cardigans and slippers. These are the men whose wives buy all their clothes for them, who would like to wear the same thing year in and year out, and who don’t care whether black is the new black, or if bottoms are the new bust, as long as M&S still stock the same trousers as they did three years ago.
Since M&S moved away from “classically stylish” clothes, and began trying to keep up with the competition, wives who could formerly swoop in and rekit their husbands in half an hour, have been traipsing the high street looking for the middle aged look that doesn’t exist any more.
Granted, Oxfam is a godsend: I recently found four M&S (as new) shirts in my local branch for £2.99 each. And in the past few years my husband has bought three perfectly respectable jackets there.
This is the university educated, middle class professional who reached the age of forty without owning a suit, and who took Richard Branson as his role model in dispensing with ties. Some years ago he had an important job interview coming up, and he temporarily put aside his favourite Thoreau dictum that you should beware of all enterprises that require new clothes: I was dispatched to buy him a suit. Still reeling from the idea that my husband would not be visiting the shop, the shop assistant offered me something as “the most up to date style,” and was horrified when I explained that I needed a classic design that wouldn’t date, as the item would be worn for interviews only, and would be the only suit my spouse would ever own.
Having finally acquired a suit from M&S, we realised that he had no black shoes to go with it. We found some old beige ones in the back of the wardrobe and transformed them with a bottle of instant shoe colour. But during the interview, my husband was disconcerted to see the panel chairman staring at my husband’s shoes, transfixed. The black dye was flaking off the shoes, and revealing the old colour underneath. (No, he didn’t get the job.)
Whilst M&S have been chasing hot fashion, there has been an increasing danger of these middle-aged men - children in the market place - losing their way. For the past few years, two pairs of old patched jeans have been sufficient garb for my husband’s favourite pastime of DIY. But these got to the stage of being knee deep in three layers of patches, with new rips appearing just above the patch zone. One day I heard pathetic whimpering coming from my husband’s deep litter clothes storage system in the bedroom: it was the said jeans begging to be given sanctuary in the fabric recycling bin.
He let them go, and in our local agricultural suppliers he was seduced by a Dickies boiler suit in a subtle bottle green, for only £25. Here was a garment he could relate to. It was practical, comfortable, warm, commodious, cheap and had, joy of joy, 9 pockets, three of which were zipped.
But the boiler suit was so new, so comfortable, so smart, he refused to wear it for jobs such as mending the shed roof, because it might get dirty. Instead he would don it as soon as he got home from work, slipping into it as “smart leisure wear.” At the weekend he would wear nothing else, and I colluded with him, and bought him another one in navy blue.
I was on the point of persuading him that in fact they weren’t classy leisurewear, when, by some freak chance, he spotted a men’s fashion article in a colour supplement. This featured a boiler suit by Kenzo Homme, at ten times the price of his. He was trendily dressed – the only recorded time since student days.
Last week, something similar happened. The family had at last convinced him that his battered sixties white leather belt (with the white cracking off ) was past it, and I was off to M&S for a new black one. Then the photo appeared in the paper: Bob Dylan clutching a Golden Globe award and wearing a black suit with a white leather belt. Apparently, “If it’s good enough for Bob Dylan, it’s good enough for me.”
So, come on M&S. Take the weight from our shoulders, and get back to what you do well: providing clothes for middle aged men who want to dress as they’ve always done. They can be boring and respectable, and we can have the biggest bit of the clothing budget.